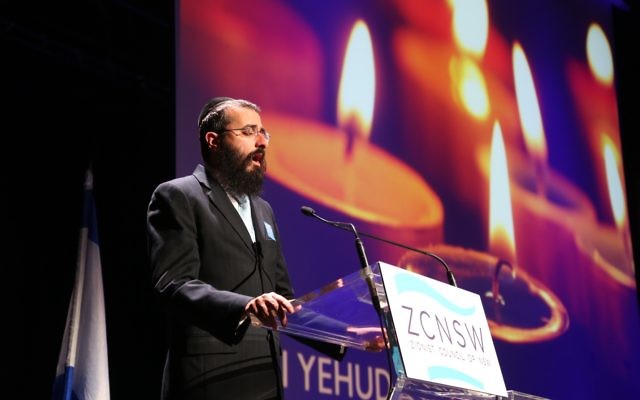 MORE than 300 people attending a Yom Hazikaron remembrance ceremony at Sydney’s Moriah College on May 10 got a real sense of the human cost of protecting the State of Israel through the words of guest speaker Omer Levi.

The 28-year-old suffered permanent disability and almost died in 2014 while carrying out his duty as an evacuation commander in the Israeli Army, tasked with driving into a Hamas terror tunnel in Gaza in an attempt to rescue a fallen soldier.

While Levi survived, five soldiers in his unit tragically died.

“The day after Yom Hazikaron is Israel’s Independence Day, and the best way to pay your respects to those soldiers who died is to go out and celebrate Israel,” Levi said.

Anat Sultan-Dadon, the deputy chief of mission at the Embassy of Israel in Canberra, said, “We bow our head tonight for the 23,447 fallen Israeli soldiers and victims of terror.”

In Melbourne, more than 1000 people came together to pay tribute to Israel’s fallen soldiers and victims of terror on Tuesday evening to mark Yom Hazikaron.

The event was hosted by Zionism Victoria in partnership with the United Israel Appeal, and included testimonials, musical performances, and candle lighting.

Among them, Shoshana Amstel (pictured) lit a candle in memory of her brother Shaul Elias, who was killed by artillery fire during the Yom Kippur War. Israel by Choice (IBC) representatives Helen Lewitan and Tayla Cohen, meanwhile, lit a candle in memory of Rabbi Nehemia Lavi, who was murdered in a recent episode of terror when he came to the aid of a family under attack. Lavi’s brother-in-law is the former director of IBC.

This year’s ceremony also focused on the 60th anniversary of the 1956 Sinai Campaign, and ten years since the Second Lebanon War. Zionism Victoria president Sharene Hambur said those who attended “expressed, by their presence, the strong bond between the Melbourne Jewish community and Israel”.

“I am sure all of those who attended came away both reflective of the tremendous price paid by the State of Israel and comforted by the communal show of support,” Hambur said.