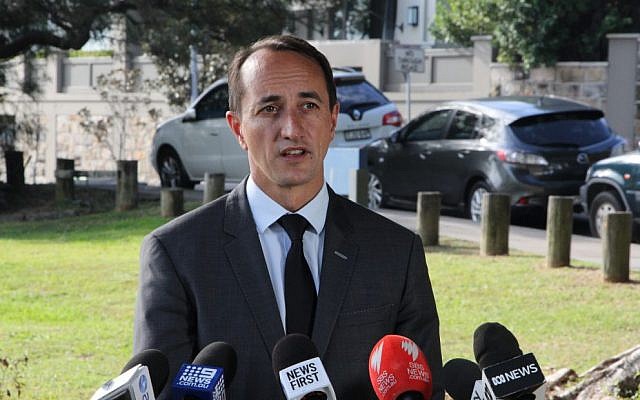 THE federal seat of Wentworth is home to much of Sydney’s Jewish community and the host of many of its most important communal institutions.

This is a part of what makes Sydney’s east such a culturally rich and diverse place, and so important to the fabric of our country.

I feel privileged to enjoy many deep friendships and partnerships across the community, forged both during my four years as Australia’s ambassador to Israel and since returning home to Australia. But as the newly elected Member of Parliament for Wentworth, I now feel a special, additional responsibility to support and represent the Jewish community.

I take this responsibility very seriously, and as I told The Australian Jewish News the day my election was confirmed, you can always count on my friendship and support.

First, I will remain a great enthusiast and supporter for the relationship between Australia and Israel.

I am proud that during my time as ambassador we took the relationship to new heights. The first ever visit by a sitting Prime Minister of Israel to Australia, by Benjamin Netanyahu in February 2017. The historic commemoration of the 100th anniversary of the Battle of Beersheba. The creation of the Tel Aviv Landing Pad, a hub for tech entrepreneurs and start-ups. New and growing linkages in the innovation and technology sectors. Over 20 Israeli technology companies now publicly listed on the ASX.

I will continue to advocate for us to do more to fulfil the promise of partnership between our two nations. We have much more to learn from each other.

Second, I will always stand up, forcefully and passionately, for Israel’s legitimacy as the nation state of the Jewish people and Israel’s right to defend itself.

Israel faces security challenges and dilemmas that are incomprehensible in Australia and the West. But far too often, Israel is held to different standards, or singled out for disproportionate criticism, in the international community and in the United Nations and other bodies.

I will always speak out for Israel against such unjustified attacks and unwarranted criticism.

Third, I will always call out antisemitism in all its manifestations firmly and promptly.

It is a sad truth that antisemitism is rising around the world. And though I believe Australia has a better record here than most countries, we are not immune.

The last several months have seen disturbing outbreaks of antisemitism, including here in Wentworth, and growing intolerance towards the religious and communal plurality that is one of Australia’s great strengths.

Whether it is outright antisemitism, or more insidious forms such as the BDS movement or other attempts to delegitimise Israel, I will be steadfast in showing zero tolerance towards such attacks on the Jewish community.

Fourth, I will be a steadfast supporter of the Jewish community and Jewish life in Australia, including protecting the community from threats and supporting institutions which foster Jewish communal life.

I have been proud to help secure over $2 million in federal government funding to provide important upgrades to community security infrastructure.

Ensuring Australians can practise their faith and belief and traditions in peace and safety, without harassment or intimidation, is a core Australian value and one of the most important duties of any government.

The Australian Jewish community has contributed greatly to the development and progress of Australia, over many generations and in many spheres.

And it is Wentworth that is the proud home of so many community figures who have given so much to Australia. It is a true honour to represent such an esteemed community in the federal Parliament.

Dave Sharma is the incoming Member for Wentworth.