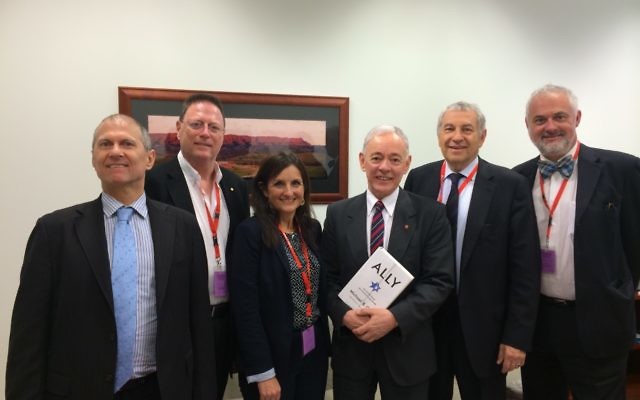 A DELEGATION from the Zionist Federation of Australia (ZFA) recently visited Canberra to meet with government, opposition and crossbench members of Parliament, including cabinet ministers, and their advisers.

ZFA president Danny Lamm told The AJN that the purpose of the trip was “to connect with our political leaders in an environment where we know that Israel’s opponents are constantly plying their trade and their messages to try and convince the government and the opposition to change their bipartisan support of the State of Israel”.

Chairman of ZFA’s Public Affairs Committee Ron Weiser and Lamm, who have both recently returned from trips to Israel, provided the parliamentarians and staffers with an up-to-date security briefing on the situation in Israel.

Lamm said the delegation received a positive response from those they met.

“We got a great hearing – all of them were well informed and most supportive,” he said.

Tatarka told The AJN that he hopes the federal government will make a commitment for security funding for the centre, following on from the Victorian government led by Premier Daniel Andrews delivering on its pre-election pledge to grant $500,000 for the centre’s security.

Andrews has since written to both former PM Tony Abbott and current PM Malcolm Turnbull, encouraging them to also provide financial assistance for the centre.

On a separate engagement in Canberra, Lamm and ZFA executive director Ginette Searle met with the Board of the ACT Jewish Community to discuss the decision at their recent AGM to establish a Zionist Council of ACT for the first time.

Lamm told The AJN that the ZFA has offered assistance to the ACT Jewish Community in the council’s formation. “I think it’s pretty significant. We have an office there in the Jewish community and I think it will be a springboard for a lot more activity.”