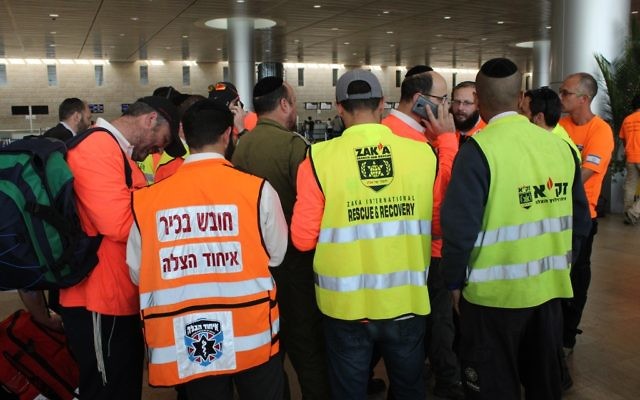 THE Australian Jewish community has mobilised behind the victims and survivors of Nepal’s deadly earthquake, which has so far recorded a death toll of close to 5000 people, many more thousands injured, and widespread destruction.

With Israeli and global Jewish organisations among those leading the relief efforts, their Australian counterparts are seeking donations from the local community – and have been overwhelmed by the response so far.

With the backing of the Australian Friends of Shaare Zedek (AFSZ), Shaare Zedek, Jerusalem’s largest hospital, is taking a lead role in the Israel Defence Forces’ (IDF) medical mission responding to the crisis.

“We are proud that Shaare Zedek has both the expertise and the willingness to provide urgent humanitarian care in this devastating situation,” said Dr Allan Garfield, AFSZ chairman.

Meanwhile, Magen David Adom (MDA) teams were the first medical teams to arrive on the ground in Nepal, having chartered a plane filled with baby formula, water and medical supplies. They have since been working with the IDF, and are treating Israelis affected as well as many local Nepalese.

In this climate, MDA Victoria has launched an appeal to raise funds for emergency medical supplies and material goods for humanitarian aid. The campaign had raised approximately $15,000 by Wednesday morning. The AJN boosted the appeal with a donation of a further $10,000.

“The devastation in Kathmandu is catastrophic,” insisted MDA Victoria co-president Glynis Lipson, appealing to the community to continue its support.

International humanitarian organisation the Joint Distribution Committee is also collecting funds for relief efforts, to which the Australian community can donate.

Furthermore, the alumni of the Tevel b’Tzedek “Exchange for Change” 2013/2014 program – a joint initiative of Stand Up and the Australasian Union of Jewish Students – have also launched an appeal.

“Some of the photos really struck us; we saw homes we had stayed in destroyed,” said Rachel Flitman, a participant in the five-week program which saw eight university students living and volunteering in the small village of Manegau, Nepal.

“It became a disaster that was very personal … there was a strong consensus that we wanted to help.”

They have so far raised more than $5000, which will go towards Tevel b’Tzedek, the Israeli aid organisation that facilitated the “Exchange for Change” program and has been working on the ground in Nepal for many years.

Synagogues in Australia are appealing to their congregations to support Chabad of Nepal, which has taken a lead in relief efforts and become a 24-hour refuge centre and field office for coordination of rescue and relief efforts.

Rabbi Levi Wolff of Sydney’s Central Synagogue knows Rabbi Chezkie and Chanie Lipshitz of Chabad Nepal personally, and lauded their efforts. “[They] have opened up their Chabad house and with the help of mobilised teams of volunteers, are desperately helping hundreds of people from around the world who are searching to locate and identify the safety of their loved ones and friends,” he said.

In Melbourne, Daneli’s Deli will donate 25 per cent of tomorrow’s (Friday’s) proceeds to the Chabad House in Nepal.

Nepal is a popular destination for Israeli travellers. Nine remained unaccounted for at the time The AJN went to press on Wednesday.

The Australian Jewish News has donated $10,000 to the MDA appeal.

AJN owner and publisher Robert Magid feels particularly strongly about the cause, having lived in the Nepalese town of Pulchok for three months many years ago. He recalls “a beautiful place” and “the most gentle people”.

“It is such a serious tragedy … The main thing is lives lost, but an entire civilisation seems to have been destroyed,” Magid lamented.

MDA Victoria co-president Glynis Lipson said she “burst into tears” when she heard of the generous donation.

“The cost involved to MDA to do the mission is huge. The jet we chartered is a private jet, and you can imagine the cost of that,” she said.

“The ongoing support that MDA will give the people of Nepal is at a huge cost to MDA: medical supplies, blankets, water – any other humanitarian aid that they need. Not being supported by the government, we rely on donors like the people of Australia to be able to carry out these missions.”

To donate to Tevel B’Tzedek through the appeal set up by the “Exchange for Change” alumni, go to https://www.mycause.com.au/page/96398/nepalearthquakerelief.

To donate to the Joint Distribution Committee’s relief efforts, go to http://jdc.org/nepalearthquake.