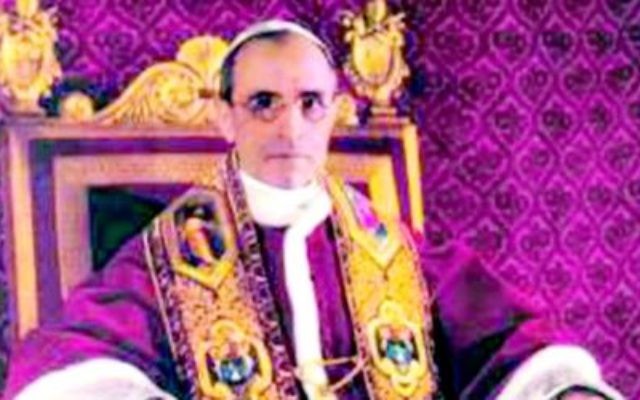 Pius XII has been widely accused of not interceding to try to stop the Nazi slaughter of European Jewry, but Fischer said in his new book, Holy See, Unholy Me: 1000 days in Rome, that the attacks are misguided.

“The American Jewish lobby is run by hardliners who get their daily feed from Jerusalem and Tel Aviv, and will cut no slack in terms of Israel’s policies in the West Bank,” Fischer, who was the deputy prime minister from 1996-99 and Australia’s ambassador to Holy See from 2008-12, says in the book.

He claims that the attacks on Pius XII, who is being ­considered for canonisation, continue today.

“The moment any suggestion is made to consider Pius XII for beatification and sainthood, they hit out at close to full power and use all media avenues to stamp it out.”

Of the Pope’s wartime record, Fischer writes that he “instructed Catholics to help Jews, hiding hundreds in convents, monasteries and the Vatican”.

Executive Council of Australian Jewry president Dr Danny Lamm said that Fischer’s criticism of “the Jewish lobby” ignores the fact that Catholic and other ­historians have also pointed an accusing finger at Pope Pius XII.

“One of the sternest critics of Pius has been the Catholic writer John Cornwell, the author of Hitler’s Pope: The Secret History of Pius XII,” Lamm said.

“There is of course a simple way to resolve the ongoing controversy about this Pope.

“The Vatican could open all, and not just some, of its archives to historians, exactly as Jewish organisations and others have been calling on it to do.”

Australian Catholic historian and educator Dr Paul O’Shea – author of A Cross Too Heavy, about Pius XII and the Shoah – told a conference last year that until the Vatican opens the full archives on Pius XII in 2014, there can be no answers to gaping questions, such as why he did not respond after entreaties from Italian bishops in 1943, while some 1200 Jews from Rome were transported to Auschwitz.