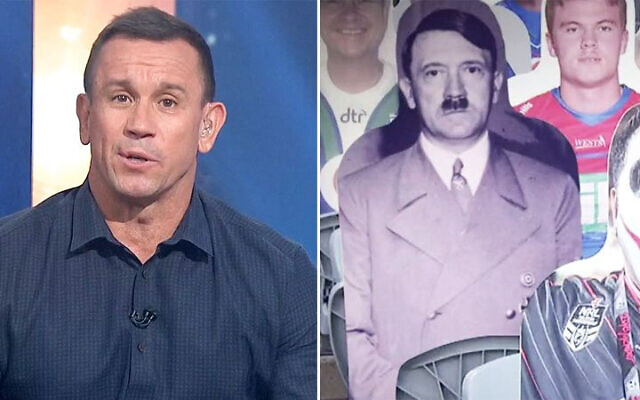 Matty Johns (left) has apologised for the image of Hitler (right) that appeared on his show on Fox Sports last Sunday. Photo: Fox Sports/Twitter

The incident – in which Johns’ program photoshopped an image of the Nazi leader onto a cardboard cut-out of a fan at a football stadium – prompted an immediate apology from Fox Sports and Johns personally, and made headlines around the world.

The AJN, which first reported the incident, can reveal that on Tuesday, following an invitation from the Sydney Jewish Museum (SJM), Johns agreed to a tour and a meeting with a Shoah survivor, once the museum reopens. The museum has been closed to visitors due to the coronavirus outbreak.

Stating that the segment “was in poor taste and completely inappropriate”, Johns said he needed to “personally step up to this”.

“I know how raw and devastating those events remain for so many people and families,” he said.

“I acknowledge it was wrong and I apologise to our viewers and to everyone in the community who is rightly concerned and offended by the segment.”

He added, “I’ll be apologising on air to all our viewers.”

A spokesperson for Fox Sports, meanwhile, said the network was “very concerned” by the incident, and is “currently reviewing the circumstances and examining the action we need to ensure those involved understand it is not acceptable”.

SJM CEO Norman Seligman told The AJN, “I am very pleased that Matty Johns has accepted my invitation to visit the Sydney Jewish Museum and also meet with a Holocaust survivor.

“The passage of time has not diminished the very important lessons of the Holocaust. The need for awareness and sensitivity is even more evident given the worldwide events we are witnessing in 2020.”

The segment triggered a spate of angry comments on social media from NRL fans, who described the incident as “sickening” and “shockingly offensive”.

Commending Johns and Fox Sports “for their swift apology and for being so responsive to community concerns”, Ryvchin added, “Hopefully this incident leads to greater tolerance and understanding.”