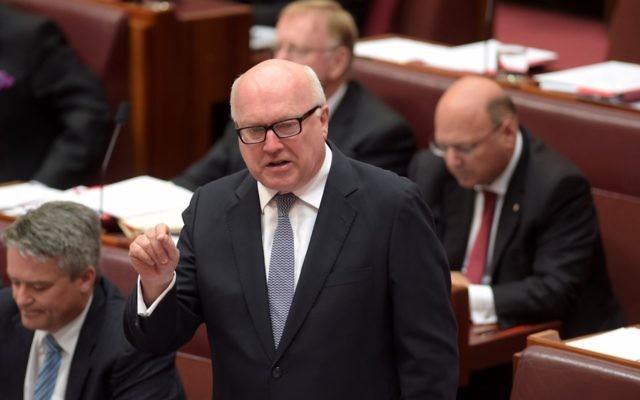 THE federal government today (Thursday) introduced to Parliament a new criminal offence of advocating genocide, which could see offenders who publicly “counsel, promote, encourage or urge” genocide imprisoned for up to seven years.

The AJN can reveal the offence applies to “advocacy of genocide of people who are outside Australia”, or the genocide of “national, ethnic, racial or religious groups in Australia”, and the advocacy itself can occur either in Australia or overseas.

Addressing the Centre for Independent Studies in Sydney last week, federal Attorney-General George Brandis said, “In the government’s view, the preaching of the genocide of a race or population can never be regarded as being the equivalent of the mere expression of a radical political opinion: it is an injunction to violence and slaughter.

“Yet advocacy of genocide does go on, unpunished, in Australia today – in particular, directed against Jewish people and against the State of Israel. It will no longer be lawful to engage in such conduct.”

Reacting to the new crime, Executive Council of Australian Jewry executive director Peter Wertheim said there are both positives and negatives in the government’s proposal.

“One positive is that the new criminal offence will only require proof of ‘advocacy’ of genocide, rather than the more difficult-to-prove ‘incitement’,” he said, adding that the maximum penalty of seven years’ imprisonment is “appropriate”.

Stating that the biggest negatives are the proposed defences, Wertheim said the so-called “good faith defences”, which will be available to anyone charged with the offence, are appropriate in civil cases, but not for criminal offences.

“Worse still, any persons charged with advocating genocide will be able to plead in their defence that they did so for a ‘genuine purpose in the public interest’. The availability of this defence would merely create an opportunity for such persons to use the ensuing trial, with impunity, as a public platform to further advocate genocide and to seek to justify it. This is precisely what was attempted by the defendant in the [Fredrick] Toben case.”

Wertheim added: “These proposed defences are a gaping loophole in the proposed new law and need to be removed from the draft legislation.”