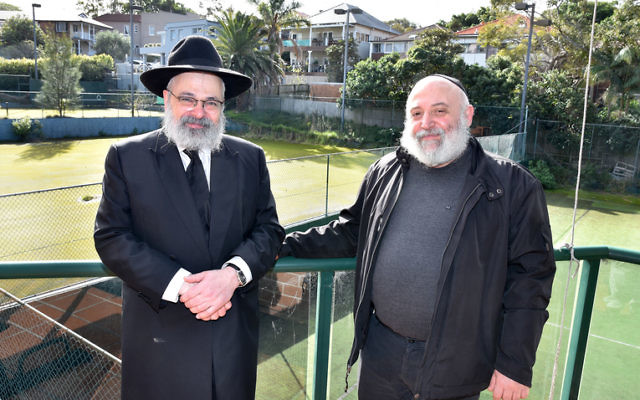 AFTER 12 years of frustration, Sydney’s Russian-speaking Jewish community is in celebration after Friends of Refugees of Eastern Europe’s (FREE) long-planned synagogue and community centre finally got the green light last week.

The Waverley Development Assessment Panel approved FREE’s latest development application on June 27, for the construction of a new synagogue, community centre and 32 residential units in Wellington Street, Bondi.
Rabbi Yehoram Ulman – who co-founded FREE with his wife Shternie in 1986 – described the panel’s decision as “a tremendous milestone that our flourishing community is more than excited about – it’s relieved and ecstatic about this news, because this is something we’ve been fighting obstacles on [in the application process] for many years.
“One of the largest minorities within Sydney’s Jewish community will now have a home.”

The new shule and community centre will offer a wide range of religious, educational and cultural services, the space to host community events that previously had to be held at other venues, and it will also be the new headquarters for the Sydney Beth Din.

The inclusion of the residential block component is anticipated to result in enough revenue to significantly offset the shule’s construction cost, estimated to be $3.89 million.

It then spent a decade working with Waverley Council and the NSW Government to have the site successfully rezoned, and then in 2016 it lodged another application, for a three to four-storey synagogue on the site, a 12-space underground parking lot and two three-storey apartment buildings.

But last year the Land and Environment Court rejected it on the basis that a security and public safety risk identified by the applicant – which could have the potential to impact neighbouring properties and people in the vicinity – had not been addressed.

Rabbi Ulman said at the time the Court’s decision “basically implies that no Jewish organisation should be allowed to exist in residential areas”.

“It stands to stifle Jewish existence and activity in Sydney and indeed, by creating a precedent, the whole of Australia, and by extension rewarding terrorism,” he said then.

The rejection made headlines around the world after the mainstream media reported that the rejection was on grounds the new synagogue would be a terror target without clarifying that the risk had been identified by FREE itself.

A new application was lodged with Waverley Council by FREE last September, which attracted 186 public submissions in favour, and 80 against.

In granting approval last week, the panel said “the main issues arising from the assessment of the application are acceptable on planning merit”.

Waverley Councillor Leon Goltsman said it would be “of great benefit” to the Russian Jewish community to finally have a shule on the site.

However, he lamented the way the application process was handled.

“The fact it was taken out of council’s hands and went straight to the Land and Environment Court, [meant] we didn’t have a chance to work with the applicants and it took a great deal longer for the approval to take place,” he said.

“This time they followed everything through and worked with council rather than against us.”
He said there are some conditions that will need to be met but described the result as a “win-win” for FREE, Waverley Council and neighbouring residents.

“Now they can all work together,” he said.

The shule will accommodate up to 394 people onsite, including 100 in the main sanctuary.

Security measures will include a CCTV camera surveillance system that can record continuously throughout the public, entrance and exit areas and meet all NSW Police guidelines.

Consent is also provided for the shule to arrange security guards to be on duty outside the main entrance.
Rabbi Ulman offered thanks to a core group of business people who contributed time and effort to drive the project, and members of the community “for their written and moral support”.

“The community is now looking forward to the ground-breaking ceremony for the shule, which we hope will happen before the end of this year.”