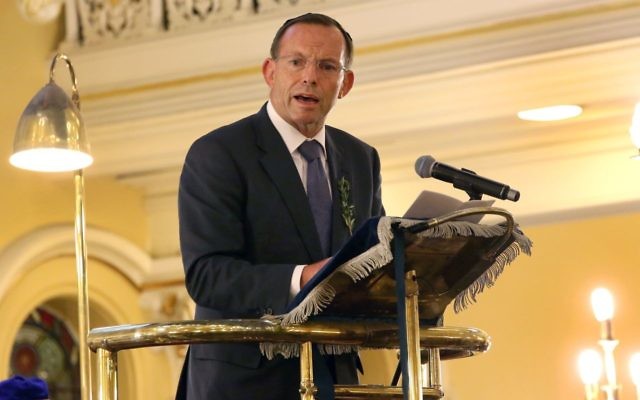 THERE could not have been a more fitting venue than The Great Synagogue to remember the sacrifices made by Jewish servicemen and women in defence of their country.

Last Sunday, within the very walls where 100 years ago, Rabbi Francis Lyon Cohen implored young Jewish men to enlist to fight in The Great War, the deeds of all those Jews who served then and since were afforded a deserved and moving tribute.

“We all know the extraordinary sacrifice that Australians made in the Great War. From the Jewish population – then just 20,000 – some 2500 volunteered and 300 never returned.

Abbott singled out several Jewish heroes of Gallipoli for praise, among them Leonard Keysor and “Australia’s finest general”, John Monash.

“He should be as well known to each generation as he was to his contemporaries,” he said.

NSW Governor David Hurley said the Jewish community “has a long and proud history of service to our defence force and the campaigns which our nation has fought, from Gallipoli to Tarinkot [Afghanistan]”.

“The desire to serve this country and to live up to the Anzac legacy is still evident in your community today,” he said.

In a touching moment, Governor Hurley stopped to collect his composure while paying tribute to Private Greg Sher, who was killed in action in Afghanistan in 2009. Clearly emotional, he qualified “I’m sorry. I knew the man,” before continuing in wavering tones.

Minister for Veterans’ Affairs Michael Ronaldson said: “Regrettably the history of the Jewish community in our armed forces is not well known, but it must be.

“We owe all those from the Jewish community who served in defence of our nation an enduring and enormous debt of gratitude.”

The afternoon’s proceedings were accompanied by the uplifting sounds of a combined choir featuring students from Sydney’s Jewish schools.

A special NSW Association of Jewish Ex-Servicemen and Women (NAJEX) Centenary of Anzac Award was presented to former NAJEX, FAJEX and Sydney Legacy president Wesley Browne. Browne later told The AJN the unexpected honour caught him off-guard. He also remarked that it was extraordinary that two of his school friends from 85 years ago, Louis Rischin and Neil Cohen, both of whom served, were also at the service.

The afternoon was emceed by Flight Lieutenant Daniel Mendoza-Jones.