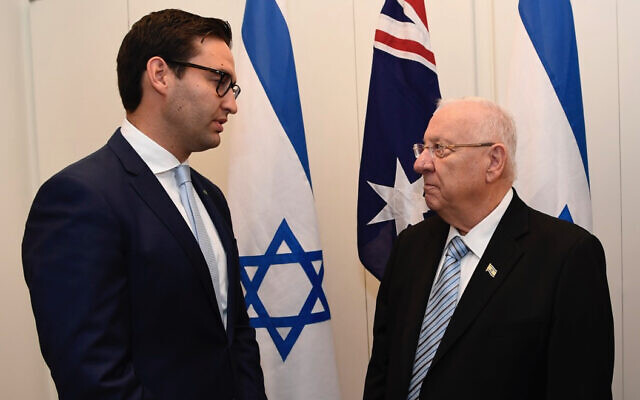 ISRAEL’S President Reuven Rivlin has vowed to personally intervene in the Malka Leifer case if no progress is made following this week’s court hearings in Israel.

Rivlin – who on Wednesday wrapped up his first official state visit to Australia – met with Prime Minister Scott Morrison in Canberra, along with a number of other federal MPs from both sides of politics.

Stating that he had raised the issue of extradition with President Rivlin, Macnamara MP Josh Burns said, “I was pleased that President Rivlin advised me that if hearings scheduled this week do not see this matter progress towards Malka Leifer being extradited to Australia, he will personally meet with the Chief Justice of Israel to discuss how this matter can be expedited.”

Burns said the matter had “dragged on far too long”.

“These victims deserve justice and I will continue to fight until Malka Leifer is back in Australia facing trial,” he lamented.

Ahead of his visit to Australia, Rivlin told The AJN everything possible was being done to expedite the case, and he had been “fully briefed”.

“I understand how painful and difficult the case of Malka Leifer is for the Australian Jewish community and for Australians generally,” he said.

“The professional opinion of the Ministry of Foreign Affairs, the Ministry of Justice and the State Prosecutor’s Office is that the extradition should be carried out as soon as possible and are doing everything possible to expedite it.

In addition to meetings with Morrison and Treasurer Josh Frydenberg, Rivlin also sat down for talks with Opposition Leader Anthony Albanese and other senior Labor MPs.

Leifer’s matter resumes in court on Wednesday and Thursday (Israel time), when three members of a psychiatric panel, who had previously determined that Leifer was feigning mental illness, will be cross-examined.

Full Rivlin coverage in this week’s AJN, out Thursday.