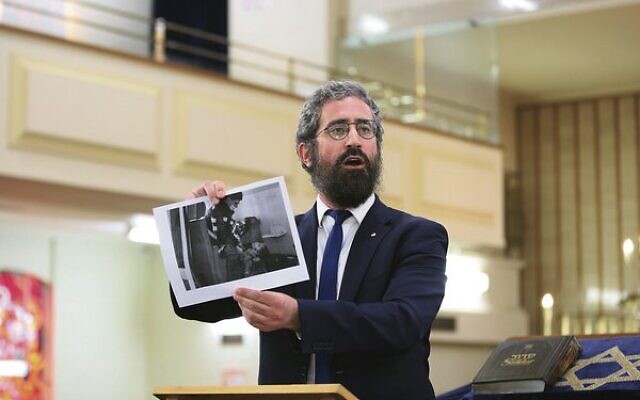 “SHOW this to Putin!” Holding up a picture of a six-year-old Ukrainian girl killed last weekend by Russian shelling, that was the message from the president of the Rabbinical Association of Australasia (RAA) Rabbi Yaakov Glasman when he addressed a ­solidarity service at Caulfield Shule.

Hosted by The Joint Australia (JDC) together with the RAA and Rabbinical Council of Victoria (RCV), Monday evening’s gathering heard from Joint advisory committee member Dr Erica Frydenberg who noted that the global Jewish relief organisation had raised half a million dollars in just three days.

“These post-communist communities do not have a Jewish welfare organisation,” she said, stressing why their work was so critical for the war-torn country’s 200,000 Jews, and reflecting on the JDC’s ties to our own community. “I would not be here if it wasn’t for The Joint, and many of my generation post-Second World War came to this country because of the rescue and assistance of The Joint,” she said.

Speaking to The AJN on Wednesday morning, JDC executive director Brett Kaye expressed gratitude to the community for their “incredible response” to its campaign to raise money for Ukrainian Jews.

Rabbi Glasman, meanwhile, hailed Ukraine’s Jewish president Volodymyr Zelensky, stating, “[He] has shone during this time, unlike his cowardly counterpart who sent off his troops while he lays in the Kremlin, protected by his army. Volodymyr Zelensky picked up arms and he led his people, the way our sages teach us Jewish leaders and Jewish kings used to.”

The St Kilda Shule rabbi added, “Ukrainian Jewry is suffering. We are also suffering, we feel that. There is no such thing, my friends, as Australian Jewry, American Jewry, and Ukrainian Jewry. There is Jewry.”

The assembled also heard from the Ark Centre’s Rabbi Gabi Kaltmann, who recalled his own visit to Ukraine in 2011, as a camp counsellor.

RCV president Rabbi Philip Heilbrunn and immediate past president Rabbi Daniel Rabin led the congregation in prayer, while executive director of The Joint Brett Kaye led those gathered in song.

A service at Sydney’s Central Synagogue went ahead last night, cohosted by Friends of Refugees of Eastern Europe (FREE), the Hamerkaz Centre and the Rabbinical Council of NSW.

Meanwhile, the Executive Council of Australian Jewry (ECAJ) expressed its “deep concerns for the Jewish community in Ukraine” and hoped all Ukrainians “remain resolute in the face of these grave challenges and take comfort in the knowledge that the world is with them”.

For more information or to make a donation, visit thejoint.org.au