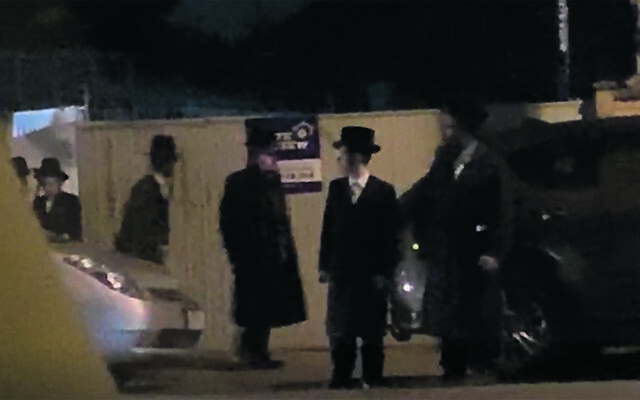 A screen grab of video taken of participants in last week’s minyan in Melbourne.

The Prime Minister announced that religious gatherings would be restricted – with measures applying to outdoor spaces associated with such venues – from midday local time on Monday, March 23. Yet, footage emerged two days later, depicting ultra-Orthodox men later identified as members of a breakaway group from Melbourne’s Adass Israel as they attended a makeshift minyan. The two witnesses who captured the footage counted around 40 individuals who filed in and out of a premises on Glen Eira Road.

The footage drew the ire of many far and wide, with Federal MP Josh Burns commenting, “This is about the health and safety of our entire community and the entire nation. No minyan is more important than that.”

Federal MP Josh Burns has stressed that no minyan is more important than the health and safety of our community, after footage emerged last night of a group of ultra-Orthodox individuals in Melbourne attending a makeshift minyan.

President of the Adass Israel Congregation Benjamin Koppel condemned the act, reiterating that Adass have “no affiliation whatsoever” with the group that broke away from them more than a year ago. He added that Adass leader Rabbi Shlomo Kohn was “appalled” by the gathering and had ensured the closure of the Adass Synagogue from Friday, March 20.

“He also expressly forbade any private prayer services to be conducted by members of the congregation”, continued Koppel.

Yet, in documents obtained by The AJN, representative of the breakaway group Motty Fixler said the actions of the shule, known as Beis Medrash Veyatzev Avruhom, were “100 per cent compliant with all government regulations”.

All Synagogue gatherings are suspended until further notice.

This will save lives. #flatteningthecurve #auspol

According to the documents, the group contends it received special approval from the Office of the Prime Minister to pray outdoors with space of four square metres surrounding each person. The documents also allege Victoria Police officers had visited the minyan, and approved its activities.

Burns has since investigated Fixler’s claims only to discover the name of the contact provided from the Prime Minister’s office holds the position of receptionist, and therefore without the power to issue such an exemption.

Burns charged Fixler’s actions as “deeply irresponsible”, adding, “As a leader of his community, he should have done everything in his power to comply with the directions being given by authorities, as all the other Jewish congregations have done.”

Meanwhile, it is alleged that minyanim have continued since the footage came to light, with at least two reported to have occurred at different private residences near the intersection of Glen Eira Road and Hotham Street over this past Shabbat.

Speaking with The AJN, a local resident claims to have witnessed gatherings for minyanim at one location, which occurred on both Friday night and Saturday morning, each time attended by approximately 11 men and five children. The resident said he recognised the attendees as members of the breakaway group.

“I was disgusted and appalled – although unfortunately not surprised. Their reckless behaviour endangers their own lives as well as other people in Glen Eira and Port Phillip, which already has a high number of cases.”

When asked by The AJN, Fixler denied any involvement, contending, “I did not organise any minyanim this Shabbos. I davened on my own without a minyan”. Fixler also claims he sent a text message last Thursday to shule members, stating minyanim are suspended until further notice.

But Burns and Member for Caulfield David Southwick confirmed they too received subsequent reports of ensuing minyanim over Shabbat from community members.

Victorian Shadow Minister for Police, Southwick said, “It’s greatly disappointing that we still have a small minority who continue to ignore the rules and place themselves, their families and the community at risk.

“When so many in our community are doing the right thing, it’s unacceptable that this behaviour continues and these individuals should be held accountable.”

Burns echoed Southwick’s sentiments adding, “It is deeply reckless and dangerous for anyone to gather in this kind of way, putting the lives of themselves and others at risk.

“We are used to gathering as a Jewish community and I look forward to the day we are able to come together again – but now we must do the right thing, and anyone that doesn’t will face the consequences.”

The Rabbinical Council of Victoria (RCV) also shared their disappointment and distress in light of the reports.

“The preeminent religious requirement of the time we are living in is the requirement to preserve lives and health,” the council remarked.

“We decry and condemn anyone who breaches the government’s guidelines and places the health of the community at risk. Such behaviour is a clear breach of the RCV’s explicit stance that all government regulations must be followed.

“We implore everybody to follow the government guidelines. Failure to do so is a breach of law.”

Meanwhile, in a statement released on Tuesday, the Sydney Beth Din (SBD) was unequivocal in its condemnation of clandestine prayer gatherings.

“Those who wilfully form or participate in minyanim, either inside or outside, knowingly defying the government and Beth Din directives, desecrate Hashem’s name and literally endanger lives,” the SBD said.

“No excuses or rationale can exempt them from this grave sin.”

NSW Jewish Board of Deputies president Lesli Berger said it was “an incredibly important statement”.

“They [the SBD] should be applauded for making such a strong statement at this time, which puts beyond doubt what can and cannot happen in terns of Jewish religious practice during the course of the pandemic,” he said.

“What the government is doing is completely consistent with Jewish ethics and Jewish religious practice, where we always prioritise life above all else.

“We’re doing this to protect our families,” he added, pointing out that no one is immune to COVID-19 and social distancing was essential for “protecting parents and grandparents”.