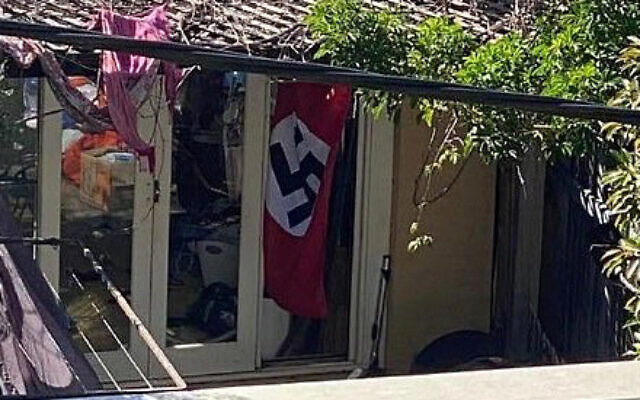 The offending flag at a Newtown home.

NSW Labor MP Walt Secord has called on Premier Gladys Berejiklian to look at ways to ban the public display of Nazi flags in NSW, after a swastika was seen hanging in the backyard of a Newtown home.

NSW Police are reportedly investigating the incident, which comes days before Yom Hashoah, where the community will pause to commemorate the six million Jews who perished in the Holocaust.

Inner West Council mayor Darcy Byrne said, “After receiving notice yesterday (Friday) that this Nazi flag was being displayed at a house in Newtown I contacted the Inner West Police who have helped to ensure that it has now been removed.”

Stating, “I believe flying a Nazi flag should be banned in NSW,” Secord, who is deputy chair of the NSW Parliamentary Friends of Israel, said, “The Nazi flag is an emblem of genocide and racism.

“[It] is deeply offensive to veterans who fought against fascism and was affront to survivors of the Holocaust and their descendants.”

He added, “Physical attacks on a person on the way to prayer, painted swastikas at Bondi Beach and a Nazi flag flying in Wagga Wagga and Newtown are all symbols of a despicable shift in our community.

“The decision to fly a Nazi flag is a simple expression of hatred.”

Currently, it is not illegal in Australia to display the Nazi swastika symbol.

Repeating his call for all Nazi insignia to be banned, Anti-Defamation Commission chairman Dvir Abramovich said, “It is frightening to know that walking among us are ‘Final Solutionists’, white-supremacists who are unabashedly proud to celebrate Hitler’s evil legacy of exterminating six million Jews and millions of others.

“As we witness an upsurge of antisemitism in our nation, spiking to alarming levels, the time has come to align actions with words.”

The incident in NSW comes days after a flag depicting a swastika was erected in the Victorian town of Kyabram, alongside two national flags of China, all stamped with the word “COVID-19″.

Responding to the Victorian incident, Shoah survivor Phillip Maisel said, “The Holocaust should teach people a lesson. You need to be considerate and respect the basic human rights. This was completely disregarded.”